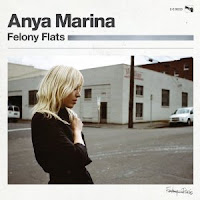 Singer/songwriter Anya Marina recently released her third album entitled “Felony Flats” back in March through Chop Shop Records/Atlantic Records. Her music has been featured all over with songs on Grey’s Anatomy, Castle, MTV’s The Real World as well as a song on Twilight’s “New Moon” Soundtrack. Now Anya is looking to find more recognition with new album to promote.

Her voice at times is soft and comforting as in “Notice Me” and can also be loud and rocking as in the album opener “Body Knows Best.” Her songs switch from the electronics of “Believe Me I Believe” to the soft jazzy sounds of “Hot Button.” Anya opens up on the alternative rocker “Flinty,” but her voice seems more attractive during the seductive dance beats of “You Are Invisible.”

Anya Marina has about a dozen live dates scattered throughout the Northeast. Please visit anyamarina.com for a complete list of shows and information on her new album.
Posted by JP's Music Blog