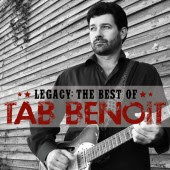 American blues guitarist Tab Benoit is ready to release his first ever “Best Of” collection. Beginning in 1992, Tab Benoit recorded over 17 albums and has performed alongside fellow musicians like Charlie Musselwhite, Jimmy Thackery, Billy Joe Shaver and Stevie Ray Vaughn’s band Double Trouble. Featured on this new release are 14 songs ranging from early originals ("Muddy Bottom Blues") to exceptional covers ("I Put A Spell On You"). The album will be released on April 3 through The Concord Music Group.

The compilation begins with “Shelter Me,” a song from Tab Benoit’s highest charting album “Power of the Pontchartrain.” You instantly find Benoit’s groove for the blues with his song “Night Train” and his cover of Buffalo Springfield’s “For What It’s Worth.” The duel guitars of “Nice And Warm” and “Comin’ On Strong” show how well Benoit’s playing locks in with his fellow musicians. One of the highlights is the down and dirty guitar solo in “Medicine” as Benoit and Anders Osborne trade licks. The album closes with two live songs, the gentle blues of “New Orleans Ladies” and the fun blues romp of “Bayou Boogie.”

Tab Benoit is beginning his tour next week in the Louisiana area before heading out west. He will be hitting the New England area in June for a couple of dates and then return again in August. For a complete list of dates, be sure to visit tabbenoit.com.
Posted by JP's Music Blog