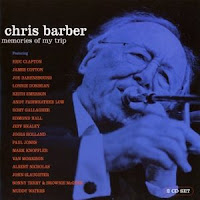 English born trombone player and band leader Chris Barber is celebrating his 80th birthday with a two-disc anthology entitled “Memories Of My Trip.” The set is made up of some of Barber’s classic performances, as well as some unreleased collaborations with Muddy Waters, Eric Clapton, Van Morrison, Marc Knopfler and more. His 60 year career in the music business is heard all over this set as he covers jazz, blues and gospel classics as well as a few outstanding original compositions.

The first disc begins with the Brownie McGhee original “Memories of My Trip,” which actually does not feature Chris Barber on the track. The song was written as a tribute to Barber’s first world tour with Brownie McGhee and Sonny Terry. The disc shifts between the classic blues of “When Things Go Wrong” and the newly recorded blues of “Weeping Willow,” which features Eric Clapton on guitar and vocals. One of the special things about Chris Barber is that he can float between the blues, jazz and even gospel as shown in “I’ll Be Rested.” Many of the songs in this collection have not been released before on CD, which is also makes this collection unique.

On the second disc you get classic live recordings like “St. Louis Blues” with Ottilie Patterson on vocals recorded in 1962. Then on the same disc you get a 2010 version of “Winin’ Boy Blues” featuring the Jools Holland band. The collection closes with three songs (“Blues Stay Away From Me,” “Dallas Rag,” “’Til The Next Time I’m In Town”) performed alongside Marc Knopfler that also features some Chris Barber vocals. While the sound quality of the songs ranges from fair to excellent, the quality of the musicianship is supreme, no matter what era it is.

Chris Barber’s “Memories Of My Trip” will be released on May 7 through Proper American Records. For more information on this release, please visit chrisbarber.net.
Posted by JP's Music Blog