CD Review: The Charm City Devils Tell Us About Their "Sins" 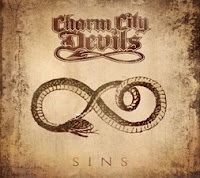 Hard rockers Charm City Devils are ready to release their sophomore album entitled “Sins.” The album’s first single, a cover of “Man Of Constant Sorrow” has been burning up the Active Rock charts and this album is one of the most anticipated hard rock albums of 2012.

The band burst out of the gate with the hard-hitting, edginess of “Spite” that gets dragged into “Unstoppable.” Their time on the road has helped them shape songs like “Walk Away” and “Start It Up” into live songs that will blow away the crowds. The energy of “Love N War” and “Blame” keeps the music at such a high level that you’ll become hooked after one listen. The album closes with the arena-sounding sing-along power ballad, “All You’ll Every Need.”

The Charm City Devils will be hitting the road for the next two months and are currently updating their website (charmcitydevils.com). Also make sure to check out their new album “Sins” when it’s released on April 10 through Fat Lady Music.
Posted by JP's Music Blog