CD Review: Eric Hutchinson Is "Moving Up" With New Album 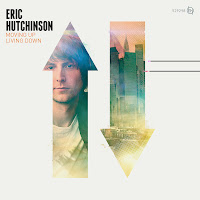 Singer/songwriter Eric Hutchinson is ready to release the follow-up to his Warner Bros. Records breakout hit album “Sounds Like This.” On April 17, Eric Hutchinson will release “Moving Up, Living Down.” It will be the first album of new material from Hutchinson in almost five years. The new album was produced by Mike Elizondo (Eminem, Regina Spektor) and Marin Terefe (Jason Mraz, James Morrison).

The album begins with the reggae-flavored “Talk Is Cheap” which displays Hutchinson’s vocals wonderfully as the music moves you. Hitchinson’s pop sensibilities can’t help but shine through on the dance-beats of “Best Days” and “The Basement.” He breaks out some soul for “The People I Know,” before getting a little funky with “Living In The Afterlife.” You can just tell that he pours his heart and soul into the album’s first single “Watching You Watch Him,” which put Hutchinson near the top of the singles chart. The album closes with the fun, island sounding sing-along “Not There Yet.”

Eric Hutchinson begins his 2012 spring tour of North America in Denver, CO on April 17. He will heading to the east coast in the beginning in May with stops in Boston, New York and Danbury CT. For more information on his new album “Moving Up, Living Down” and for a complete list of tour dates, please visit erichutchinson.com.
Posted by JP's Music Blog