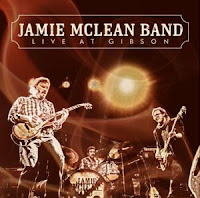 Guitarist/singer Jamie McLean was one of the musicians in the well-known Dirty Dozen Brass Band. He toured the world, performing at Madison Square Garden, the Bonnaroo festival and even at Japan's Fuji Rock festival, but there seemed to me something missing. In 2006, he left that band to create his own band simply called the Jamie McLean Band. Now six years and three studio albums later, the Jamie McLean Band are releasing their first live album on CD & DVD entitled "Live At Gibson."

Recorded live at the Gibson Showroom in New York City, Jamie McLean and his band perform as if it was their last live show together. They begin with the up-tempo, country rocker "Country Living" off last year's "Sunday Morning" album. The song features American Idol winner Taylor Hicks on vocals. Hicks returns later on in the set for a spot on cover of the Allman Brothers Band's "Midnight Rider," which features some amazing guitar work from McLean. The band goes bluesy on "Crazy About You," before returning to the country for "Summertime On Main Street," which features guest musician Jason Crosby on fiddle. The band also perform covers from Otis Redding and Tom Petty and close with a blazing version of "Holy Water," pulling out all the stops.

The Jamie McLean Band will be performing this Friday at the Ridgefield Playhouse in Connecticut along with special guest Taylor Hicks. The new "Live At Gibson" will be released on May 8 on CD & DVD through eOne Music. For more information, please check out jamiemcleanband.com.
Posted by JP's Music Blog