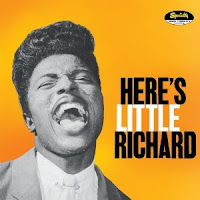 The track list for the original album plays out like a Little Richard greatest hits album with such well-known songs as “Ready Teddy,” “Long Tall Sally” and “Rip It Up.” All the songs were remastered by Joe Tarantino and have never sounded better before on CD.

Along with the original album, you get demos for the songs “Baby” and “All Night Long,” which wouldn’t be released until Little Richard’s third album. Also, with “Baby,” you also get some studio chatter as Little Richard introduces the song. The final audio track on this newly released CD is an interview with Specialty Records founder Art Rupe who signed Little Richard and released his first three albums. Also included are two screen test videos of Little Richard performing the songs “Tutti Frutti” and “Long Tall Sally.”

This wonderful collection was released on April 17 through the Concord Music Group. For more information, please visit concordmusicgroup.com.
Posted by JP's Music Blog