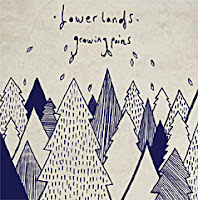 British rockers Lower Lands have recently singed with I Am Mighty Records and are releasing their new EP entitled "Growing Pains" on April 14th. In less than two years, the band have conquered their little slice of the U.K. and are heading on to bigger horizons.

The EP has a smooth, but aggressive sound with some elements of punk thrown in. The lead track, "Wide Eyes" already raises the bar as their sound is very polished along with a young energy that is hard to portray at times in the studio. The songs "Idle Hands, Empty Pockets" and "Why Don't We Just Build A Catherdral?" have the alternative rock radio sound that shows a maturity to their song-writing. The album closes with the pulse-pounding, punk-rock driven "Growing Pains" that also displays some great harmonizing between the band.

For more information on this young and rising band, check out either their facebook page (facebook.com/lowerlands) or their myspace page (myspace.com/lowerlands).
Posted by JP's Music Blog

actually lower lands is awesome band! there's no doubt about it!