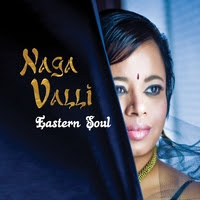 From Austin, TX, by way of Mumbai, India comes Naga Valli with her debut album “Eastern Soul.” She combines the roots of Indian/Middle Eastern classical music into today’s Latin/American pop music. Songs like “Clarity” and “Chaotic” have a unique spin on them combining American instrumentation with Middle Eastern rhythmic themes. Naga’s voice takes control of “Fear” and the East-Indian influenced “Damadam Mast Qalandar.” The highlight of the album is the emotional “If I Don’t Sing” which finds Naga pouring her heart into this performance. The album closes with the Latin-jazz flavored “Search (Kabir),” in which you can feel the true soul of the album.

Naga Valli will be performing an album release show on April 14th at the Cactus Café in Austin, TX. To find out more about Naga Valli, please visit her website (http://www.nagavalli.com/).
Posted by JP's Music Blog