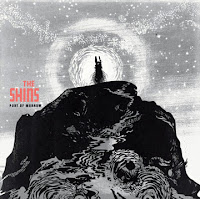 Indie rockers The Shins recently released their fourth full-length album entitled “Port of Morrow.” It is the band’s first album in five years and their first album on lead singer/guitarist James Mercer’s label Aural Apothecary in association with Columbia Records. As Mercer is the only original member, the new album is a very slick, polished piece of work. The new band seemed to use a more pop music approach to their sound on this new release.

The album begins with the dance, pop sounding “The Rifle’s Spiral,” in which you instantly notice the use of more electronic instrumentation. The album’s first single, “Simple Song” is an up-tempo song about conquering things together as a team, instead of trying to tackle these tasks on your own. The album’s second single is “It’s Only Life” which is a slow building, Beatlesque ballad with some great background harmonies. Mercer goes all acoustic on the folk-ballad “September,” but quickly returns to the pop beats of “No Way Down.” One of the highlights of the album is the slow waltz of “For A Fool” which shows us glimpses of Mercer’s earlier songwriting. The Shins finally step away from their comfort zone on the album’s closing song “Port of Morrow” in which they stretch-out their sound to a more psychedelic atmosphere.

The Shins recently performed at this year’s SXSW festival and will begin a headlining tour in a couple weeks. For a complete list of dates and more information on the new album, please visit theshins.com.
Posted by JP's Music Blog