CD Review: "Some Nights" We Have The Music Of FUN. 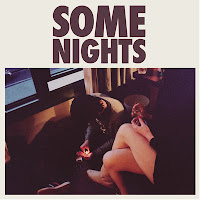 The American trio of Nate Ruess, Andrew Dost and Jack Antonoff came together after Ruess’ band, The Format disbanded in 2008. The trio known as FUN. released their debut album back in 2009 and broke into the Billboard Top 100. These past three months have see FUN. reach all-time highs in their career. The first single (“We Are Young”) off their new album (“Some Nights”) hit #1 on the Billboard Top 100 singles chart and has become the biggest selling single of 2012. Their album, “Some Nights” debuted at #3 on the Billboard Albums chart and has sold over 140,000 copies in its first two weeks of release.

The album begins with the “Some Nights Intro,” a Broadway show number that throws in elements of Queen and Electric Light Orchestra. The big theatrical sound continues into the album’s second single, “Some Nights.” The band’s motto seems to be “bigger is better,” which is exactly what the sound of their hit single “We Are Young” becomes as the simple pop beginning turns into this grand production. The song “Carry On” is the perfect generational theme song to never give and keep moving forward. The FUN. turns on the electronics for “It Gets Better” and “All Alone,” but goes overboard on the album closer “Stars” as it ends up taken over the song’s emotional theme.

The FUN. have dates scheduled throughout the U.S. until mid-June with over half of them sold out. For more information on this rising band, please check out their website at ournameisfun.com.
Posted by JP's Music Blog