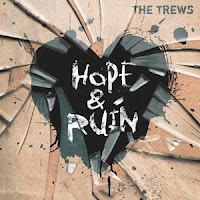 Canadian rockers The Trews are kicking off their U.S. Spring tour with a show in Bridgeport, CT on April 17. The tour will run mostly along the east coast and will wrap up in mid-May. The tour is in support of their 2011 album "Hope & Ruin." The album made the Top 10 album chart in Canada, but has failed to make a dent on the U.S. charts. This tour will hopefully change that as The Trews have the perfect mixture of rock and pop to become a big hit.

The album begins with the shout out loud chorus of "Misery Loves Company." Then the band switches gears to their more acoustic side with "One By One" as they instantly show their diversity. The album's first single "Hope & Ruin" is a great introduction to the The Trew's overall sound and appeal, but "If You Wanna Start Again" shows the true potential the band have with rocking down the walls. The band finishes the album with the mellow, but moody "You Gotta Let Me In."

For a complete list of tour dates and information on this latest album from The Trews be sure to visit their website at thetrewsmusic.com.
Posted by JP's Music Blog