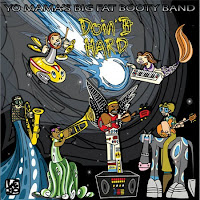 Every once an awhile, a band comes a long with a name that just screams “FUN!” and Yo Mama’s Big Fat Booty Band just happens to be one of those bands. This six-piece band is celebrating their 10 year anniversary with a new album entitled “Doin’ It Hard.” They won the Home Grown Music Network’s Album of the Year and Band of the Year awards for their debut release “Now You Know” and The Booty Band are ready to reclaim those titles in 2012. The new album was also recently featured on music.aol.com’s “Listen Party.”

The album starts off with a funky, 70’s style rocker “True Battle,” which is the perfect way to introduce the band to new listeners. Then the fun kicks in with “@$$,” a song that has a great bass groove that is sure to get your body moving as you find yourself singing along to the chorus. Then the band transports you to the disco era with “Lovin’” and “Lucky,” while the instrumental “Horn Star” and “Chaos” sound straight from Parliament Funkadelic’s songbook. The album continues with “Hot Pizazz,” a song that seems like it belongs more with the jamband community then on Top 40 radio. Then “Shadows & Sunshine,” finishes the album with the band pulling out all the stops on this funky, but spooky song.

Yo Mama’s Big Fat Booty Band is currently touring the southern U.S. through mid-June, so be sure to check them out if you’re looking to enjoy yourself and have a good time. Be sure to check out their website at bootyband.com for more information.
Posted by JP's Music Blog