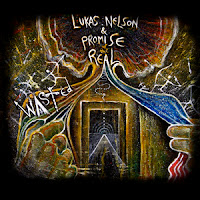 The road has been very good to Lukas Nelson, son of country legend Willie Nelson, as he and his band performed over 200 shows in 2011. During all that touring, Lukas Nelson & Promise of the Real found time to record a new album entitled “Wasted.” If you are looking for Lukas to follow in his father’s footsteps, you will be sadly mistaken. Lukas and his band know how to rock, as Lukas calls Neil Young a “distant mentor” to his musical development. The new album was released on April 3rd through Tone Tide Records.

The album begins with “Golden Rule,” a combination of a jungle drumbeat along with some southern guitar as Lukas’ voice echoes a much younger version of his father. But instead of going classic country, Lukas and his band make a right turn into southern rock with the blazing “Old Familiar Pain.” The band does end up dipping their toes into the country waters with “The Joint” as Lukas becomes almost a mirror image of his father. The band is at their best when they’re rocking as in “Don’t Take Me Back” and the album closer “Wasted.” But they also strike a chord with the slow building “Running Away.”

Lukas Nelson & Promise of the Real are currently on the road have dates lined-up through mid-June. Their tour also includes a stop at the Arch Street Tavern in Hartford, CT on May 25. For a complete list of live dates and information on the new album, please check out promiseofthereal.com.
Posted by JP's Music Blog