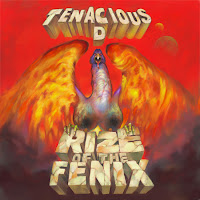 The hard-rocking, comedy duo, Tenacious D return with a new album entitled "Rize of the Fenix" on Columbia Records. While their last album "The Pick of Destiny," was a soundtrack to the band's movie of the same name, their new album is the perfect follow-up to their debut masterpiece. The album was produced by John Kimbrough and features Dave Grohl (Nirvana, Foo Fighters) on drums.

The album begins with the title song which finds Jack Black's vocal performance paying tribute to the late great Ronnie James Dio on this 6-minute epic number. Tenacious D are known for great riffs with very comedic lyrics as in "Low Hangin' Fruit" and "Rock Is Dead." They also include short skits ("Classical Teacher" and "Flutes & Trombones") within songs that seem juvenile at times, but is still funny as hell. One of the first songs written for this new album was the "Deth Starr," which is one of the heaviest songs on the album, powered by Grohl's pounding drums. The slow building "Throw Down" shows how Jack Black and Kyle Glass has matured as song-writers. The album closes with "39" as Black pulls-off his vocal impersonation of Neil Diamond.

Tenacious D will begin their tour on May 23rd out in California before heading over to Europe. They will return to the states at the end of June, performing along the East Coast before heading back out west. For a complete list of dates, check out tenaciousd.com.
Posted by JP's Music Blog