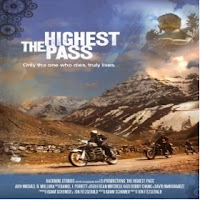 Filmmaker Jon Fitzgerald set out to create a film about finding your inner strength. What he filmed was a candid look overcoming your fears and becoming one with your surroundings. The movie is called “The Highest Pass” and it follows the journey of seven American motorcyclist as they pass through the Himalayas of India on motorcycles. Their spiritual leader and directional guide is a 27-year old yogi/zen master who helps these individuals conquer their weakness in-order to find peace within themselves.

In association with the movie is the accompanying soundtrack created by Michael R. Mollura. His Indian orchestra creates some of the most relaxing, meditative music ever heard in a film before. He has also instilled the help of Yes frontman Jon Anderson who lends is vocals to the title song and also to the song “Waking Up,” one of the few meditative songs with vocals. Anderson’s performance of “The Highest Pass Title Song” gives the song a more progressive sound, instead of a meditative. Instrumentals like “Shiva Groove” and “Moola Dance” introduce you to some of the Eastern world sounds that are not very common in the U.S. Other stars on this soundtrack are Violeta V. with her warming vocals on “Goddess Call” and Marty Lieberman’s sitar performance in “Anand’s Theme.”

I saw John Anderson last night in Calgary. He did put on a good show but he is a singer and not an entertainer. I, along with some others was very disappointed that he didn't sign autographs or talk to his fans. He only gave out one autograph (and this was behind the scenes) because someone had brought an old LP. The show wasn't even a sellout and the place only held 650 people. For a city like Calgary with a population of over a million that is not good. There were only 10 or 15 seeking autographs and he couldn't even do that. Pathetic. Even Davy Jones of the Monkees signed autographs and talked to his fans after the show. I am no longer a fan and his CD's are now in the garbage ca.