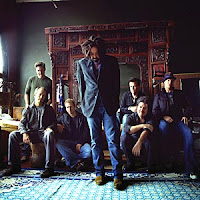 Sometimes it's a blessing and a curse when your debut album becomes the biggest selling album in your catalog and every fan knows it by heart. So, when the Counting Crows came to the MGM Grand Theater at Foxwoods last Friday night, the audience was waiting to be treated to many of the songs from that album that have played a part in so many lives. Instead, fans were treated to deep tracks from other albums and many cover songs off their newest release, "Underwater Sunshine."

The evening started off strong with "Anna Begins" as the audience settled into their seats waiting for more from their highly successful debut album "August and Everything After." Fans jumped to their feet dancing to the Counting Crows' hit single "Mr. Jones," but that would be it for most of the set. As fans waited patiently in their seats for the band to play more of their hit singles, the night was filled with cover songs from the new album and rarely played gems like "Black and Blue" and "Catapult." The opportunity to dance again didn't happen until the set closer, a guitar-filled, rocking performance of "Hangin' Around."

Although their was no performance of their well-known singles "Rain King" and "Round Here," some of the new songs like "Hospital" and "You Ain't Goin' Nowhere" received a big applause from the audience. Lead singer Adam Durtz, whose known for talking quite a bit at live shows, only spoke once when he sat at his piano center stage for a amazing version of " Long December."

The encore began with the mellow, mostly acoustic "Washington Square," before continuing with the slightly more upbeat "Come Around." As the audience held on to hope to here more from their debut album, the evening would end with the lullaby "Holiday In Spain."

As the Counting Crows surpassed their 20 year anniversary last year, they still sound great and continue to give their fans a one of a kind experience.

Setlist: Anna Begins, Untitled (Love Song), If I Could Give All My Love or Richard Manuel Is Dead, Mr. Jones, Hospital, Black And Blue, Start Again, You Ain't Goin' Nowhere, Catapult, Meet On The Ledge, Good Time, Long December, Jumping Jesus, Hangin' Around