DVD Review: Neil Finn Brings Together His 7 Worlds For "The Sun Came Out" 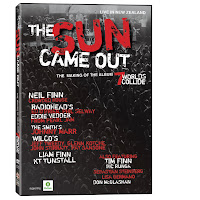 Fast forward to 2008 and Neil Finn decided to bring the band back together, but this time they would record an album of new material in addition to the charity concerts. The project was also recorded on film by director Simon Mark-Brown and released on video by Cinema Libre Studio. The DVD is called "The Sun Came Out" and was released on April 10.

The DVD begins with a very brief introduction of the 2001 charity event, but alot more is included as the bonus feature on the DVD. The video shows you how much work went in to created an album of brand-new material with 20 different musicians that would normally not perform together. Many of the same musicians from 2001 returned for this event and even a few more were added like Wilco and KT Tunstall. It's great to see the different musical styles between the musicians, but watching the video you can see how they are all inspired to perform their best for Finn's 7 Worlds Collide project.

The 2 hour DVD puts you right in the studio as the musicians discuss and argue the different ways they want their songs to end up. The musicians are very vunerable and candid infront of the cameras which makes you feel like a fly on the wall hearing these great songs be created from scratch. One great example is watching Jeff Tweedy and Neil Finn colaborate on songs.

The video also captures many of the great landscapes of New Zealand. Some of these images could have become the perfect backdrop for a documentary on the wonders of the world. One of the highlights is the inclusion of KT Tunstall and how she came to join 7 Worlds Collide and her collaboration with Bic Runga.

The only drawback is that you do not get a lot of complete takes of the songs either in the studio or live. It is almost like a video montage of many of these songs starting out, then turning into the wonderful live songs that they end up becoming. I only wish all the shows were featured as a seperate bonus like the 2001 show is.

If you are a fan of any of the artists on this DVD or you just live documentaties, this is one you need to have in your colleciton. The filiming was great and some of the moments captured on this DVD are amazing. For more information on this release, please check out thesuncamoutfilm.com and cinemalebrestudio.com.
Posted by JP's Music Blog

The information on dvd and especially the results are quite better. I like the quality and the way in which the post is written.