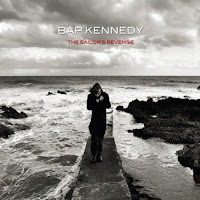 Singer/songwriter Bap Kennedy recently released his eighth studio album entitled “The Sailor’s Revenge.” The album was produced by Mark Knopfler and released on Proper American Records. On this new release, Kennedy brings together American and Irish traditions with the help of Knopfler on guitar and Jerry Douglas on lap steel and Dobro.

You can instantly hear the Irish influence of this recording as in the acoustic opener “Shimnavale.” The music just floats on by as you get wrapped up in Kennedy’s vocals. He pulls-off sounding like a young Bob Dylan on “Not A Day Goes By,” then settles into his stories as in “Jimmy Sanchez” and “Please Return to Jesus.” The song, “The Right Stuff” was written for Kennedy’s previous album, but left off at the last minute. Knopfler insisted he re-record it for this album and has become one of the highlights of this disc with its “true to life” lyrics that everyone can relate to. The gentleness of Kennedy’s voice is felt on the title-song, “The Sailor’s Revenge” as he comforts you with his words. The album closes with the Irish, lullaby-sounding “Celtic Sea.”

Bap Kennedy has some scattered dates in June and July, beginning in Lisburn, Ireland and finishing up in Perth as part of the Southern Fried Festival. For more information on Bap Kennedy’s new album and live shows, please visit bapkennedy.com.
Posted by JP's Music Blog