CD Review: The Bunny The Bear Hit You Right In The "Stomach" 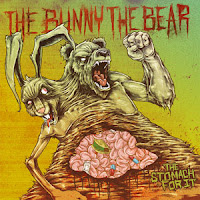 Hardcore rockers The Bunny The Bear recently released their third album entitled “The Stomach For It” on Victory Records. The band began in 2008 when Matthew Tybor (The Bunny) combined his screaming vocals with Chris Hutka (The Bear) clean vocals to create a post-hardcore, electronic rock sound. Along with multiple musicians, The Bunny The Bear was signed to Victory Records in 2011 and released their break-through album “If You Don’t Have Anything Nice To Say.”

The new album begins with the short, electronic introduction of “Congregation” before the band kicks it into high gear with Tybor’s screaming vocals on “Sky.” The combination of the “clean” and “scream” vocals are utilized perfectly in the songs “All Birds” and “Soul.” The electronic side of the band’s sound pours through on “Breeze” and “Sheep,” while the album’s first single “Lonely, Lonely, Lonely” combines the rock and electric sounds perfectly. The album closes with the club beats of “It Kills Me” which get taken over by a hardcore vocal attack.

The Bunny The Bear is currently touring the U.S. For more information, check out the band’s facebook page (facebook.com/thebunnythebear).
Posted by JP's Music Blog

The most effective, popular and productive way of marketing and advertising is the cd sticker or cd sleeves. Businesses should keep an eye on the famous rock bands to get printed their stickers on their albums that could generate good revenue.

I have heard 'The Bunny The Bear' album. It's quite amazing. But I know another singer he is also really good in his rapping LIL UZI VERT