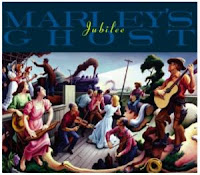 Country/Bluegrass/Folk band Marley’s Ghost is celebrating their 25th anniversary with a new album entitled “Jubilee.” The album was produced by the legendary Cowboy Jack Clement and features guest performances by Clement as well as Emmylou Harris, John Prine and Marty Stuart. The album is a mix of originals and covers from some of music most famous songwriters.

The album begins with country sounds of “Rollin” as the band’s classic, simple sound shines bright. They pick-up the pace with the quick-shuffle beat of “Wake Up Mama,” before heading over to the country blues of “The Blues Are Callin.” Guest singer John Prine trades lead vocals with Jon Wilcox on the Kris Kristofferson penned “The Old Road.” Then album begins to take-off with Bobby Womack’s “It’s All Over Now,” which features Jack Clement on vocals backed by the Old Crow Medicine Show. Emmylou Harris’ vocals add a breath of fresh air to the slow jaunt of “Growin’ Trade,” while Marty Stuart lends his vocals to “Hank and Audrey.” Marley’s Ghost tackles the traditional “Diamond Joe” as they make the song sound like one of their own. The album closes with the upbeat, fun “She Made Me Lose My Blues,” which also includes a little yodeling.

Marley’s Ghost are sticking close to home with some shows out in California, but will be venturing out soon for some festivals. Check out marleysghostband.com for a complete list of dates, as well as information on the new album which was released on June 5 through Sage Arts.
Posted by JP's Music Blog