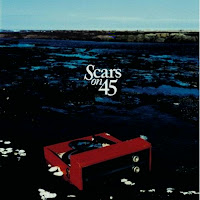 English indie-rock band, Scars on 45 recently released their debut self-titled album. It entered the Billboard Heatseekers chart at #4 back in April upon its release. The band has been on tour with “The Voice” finalist Dia Frampton and with The Fray on there most recent tour. The band’s music has also been featured on the shows "Grey’s Anatomy" and "CSI: New York."

The album begins with the full-blown, pop-rock of “Warning Sign” and never looks back. The album is packed-full of pop lyrics and radio-friendly riffs. The album’s first single “Hearts On Fire” has a nice melodic backdrop for Danny Bemrose’s vocals. The band slows down to feature Aimee Driver’s vocals in “Change My Needs,” before returning to the airy, pop rock of “Burn The House Down.” The band excels with their performance of “Beauty’s Running Wild” as it becomes the high point of the album.

Scars on 45 are currently on tour in the U.S. through July before returning to the U.K. in August. For a complete list of tour dates and for more information on the new album, be sure to check out the band’s website at scarson45.com.
Posted by JP's Music Blog