Book Review: Iron Maiden Unleashes "The History Of The Beast" 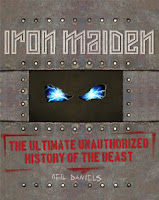 Voyageur Press, in association with Quayside Publishing, returns once again to bring us “The Ultimate Unauthorized History Of The Beast.” This 224-page book gives us one of the most detailed histories of one of heavy metal most iconic bands, Iron Maiden. Not only do you get the back-story to their success, but you also get over 450 color and black & white pictures of the band throughout their history.

Iron Maiden is one of the most artistic bands both musically and visually and this book does an excellent job representing both sides. The book is written by Neil Daniels who has written for a number of classic rock and heavy metal magazines, fanzines and websites. He has also written other books about bands like Judas Priest, Bon Jovi, Linkin Park and Journey. He does an outstanding job giving you an in-depth history of the band, without going over your head. He gives detailed information without assuming you know all the background to Iron Maiden.

Even more impressive are all the pictures from the band's live shows, to their promotional shots, to all the classic album cover art. Not only is Iron Maiden well represented, but their mascot Eddie also gets his share of pictures. Their are some covers that have not been seen since their original release dates.

The book begins with bassist Steve Harris putting the pieces together. He talks about his love for early progressive-rock music and how good of a footballer he was. As the story moves along you get the background story of addition of Bruce Dickinson on vocals and how they came to conquer the world in the mid-eighties. One of the best things about this book, besides the pictures is the short write-up on each album, how it was recorded and how popular each album became. Also included throughout the book is the setlist for each tour the band embarked on throughout their career. You get to see what songs have stood the test of time for the band live.

Like I said before, you will be amazed at the great detail that Voyageur Press put into each page. All the great concert posters and t-shirts are represented wonderfully. The book concludes with a short discography showing everything Iron Maiden released up until their 2010 album “The Final Frontier.”

“Iron Maiden: The Ultimate Unauthorized History Of The Beast” was published on June 26 and is available a major outlets. For more information, please visit voyageurpress.com.
Posted by JP's Music Blog