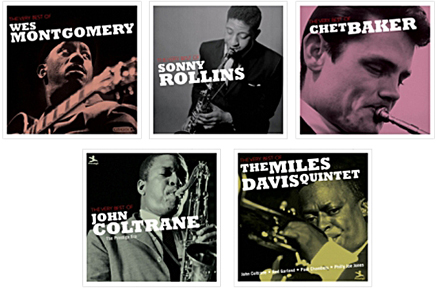 Once again, the Concord Music Group comes through with an outstanding new series entitled the “Very Best Of” and features releases from Chet Baker, John Coltrane, The Miles Davis Quintet, Wes Montgomery and Sonny Rollins. These first five titles were released back in June and each one contains no less than ten tracks that cover a certain period in that artist’s career.

Beginning with “The Very Best of Chet Baker,” we get 14 of his most well-known songs beginning with his 1952 rendition of “My Funny Valentine.” His vocals on “My Heart Stood Still” and “Old Devil Moon” are just fabulous as the music is so crisp in clear that you’d think you were in the studio with Baker and his band. The disc follows Baker’s career through to his 1965 hits “Have You Met Miss Jones?” and “When You’re Gone.” Also included with this disc is an 8-page booklet featuring brand-new liner notes from Jazz journalist Doug Ramsey and the credits to each song.

Other titles in these first set of releases cover a specific era of some of the biggest names in Jazz like John Coltrane during his time on the Prestige music label. While this time period didn’t create some of Coltrane’s most famous musical pieces, it does contain some of his most demanding. While he was only on the Prestige label less than two years, he invited some of the great names in Jazz like Thelonious Monk, Paul Chambers and Red Garland to create these truly special albums. Songs like “I Hear A Rhapsody” and “Soultrane” a very special and very important in the rising stardom of John Coltrane. Also included are new liner notes from music journalist Ashley Kahn along with song credits to the ten tracks on this disc.

The Miles Davis Quintet is arguable his most talented group he ever assembled, with John Coltrane on tenor saxophone, Red Garland on piano, Paul Chambers on bass and Philly Joe Jones on drums. Together they created the foundation to some of the most important work in Jazz history. The 10-songs on this release come from the classic string of albums, “Workin,” “Cookin,” “Steamin,” and “Relaxin,” as well as their first album together “Miles: The New Miles Davis Quintet.” Songs like the slow movin’ “Just Squeeze Me” and the up-tempo hop of “Oleo” show the wonderful range this band had when performing together. The only thing missing from this set are some live songs to show what this group was really made of and how well they fed off each other in a live setting. Music journalist Ashley Kahn adds some new liner notes to another great set of songs.

The sets rounds up with the great Jazz guitar of Wes Montgomery and tenor sax of Sonny Rollins. “The Very Best of Wes Montgomery” highlights his time on the Riverside music label with 11-songs recorded for eight albums that were released during a 3 year period. Montgomery’s guitar comes shining through on the cover songs “Besame Mucho” and “Round Midnight,” he really takes off on the originals “West Coast Blues” and “Four on Six.” The great Sonny Rollins also recorded eight albums in the same time period as Montgomery on three different music labels (Contemporary, Riverside, Prestige). With an ever changing backing band, Rollins created some of the most experimental songs in Jazz. The drum solo by Max Roach in “St. Thomas” is amazing, as is the sax solos by Rollins and Coltrane on “Tenor Madness.” Rollins was one who never needed to be in the spotlight all the time, but when it was his turn to shine, he made you stand up and take notice of his performance. Both albums, “The Very Best Of Wes Montgomery” and “The Very Best Of Sonny Rollins” also feature newly written liner notes by journalist Neil Tesser.

As the Concord Music Group continues to be the frontrunner in great Jazz releases, this new “Very Best Of” series is sure to please even the most casual fan of Jazz music. For more information, please visit concordmusicgroup.com.
Posted by JP's Music Blog