CD Review: The Damn Choir Are On "Fire" With New Album 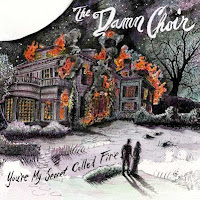 Originally from Chicago, The Damn Choir started out in 2009 with their debut album “Faithful Fools.” Now after three years of song writing and touring the band recently released their sophomore album, “You’re My Secret Called Fire.” They celebrated the release of the new album with a sold-out show at The Hideout in Chicago.
The new album begins with “Road” as you instantly notice the chemistry between the musicians as Gordon Robertson’s vocals as times draws similarities to Ray Lamontagne as in “Stars On A String.” The band’s Americana sound is a great representation of the latest folk revival in music. Robertson’s song-writing comes shining through on the first-person, situational story of “Noah.” There is some great harmonizing in “Spit,” before the album closes with the gentle sounds of “Grace” and the amazing story-telling tale of “Ghost.”
The Damn Choir has two shows scheduled in the Chicago area. Please visit thedamnchoir.com for more information on this great new Americana/Folk band.
Posted by JP's Music Blog