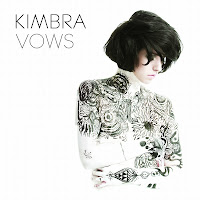 New Zealand singer/songwriter Kimbra bursts onto the music scene with her debut album, “Vows” which hit #14 on the Billboard Album chart upon its release in May. She first hit the charts back in 2011 with the single “Somebody That I Used To Know” which hit #1 on the singles chart.

The album begins with “Settle Down” which was originally released as a single in 2010 and peaked at #37 in her home country of New Zealand. The song uses minimal instrumentation, in order to focus on her vocals which have a jazzy, pop vibe to them, especially in “Something In The Way You Are.” The album’s second single; “Cameo Lover” has a more dance floor beat, while “Good Intent” has a jazz backdrop to enhance Kimbra’s sultry vocals. The dance beats are in full effect on “Come Into My Head” and “Posse,” before she shows off her harmonizing on “Home.” The album closes with the piano ballad “The Build Up,” then adds the bonus dance track “Warrior,” which hit #22 on the New Zealand single chart.

Kimbra is currently on tour all over the U.S. including a stop at the Austin City Limits Festival in October. Check out kimramusic.com for a complete list of tour dates and more information on the new album, “Vows.”
Posted by JP's Music Blog