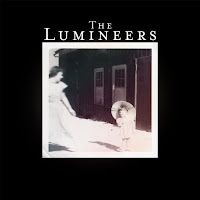 The roots revival is in full swing. Bands like The Avett Brothers, Mumford & Sons and The Punch Brothers are headlining festivals and the Newport Folk Festival in Rhode Island has been sold out for months. One of the latest bands to break through is The Lumineers with their self-titled debut album. The album was released back in April through Dualtone Records and reached #40 on the Billboard Album chart and hit #2 on the Folk Album chart.

The new release begins with the acoustic accounts of “Flowers In Your Hair” as the song builds with intensity until it’s all too quick finish. The simplicity of the instrumentation is what makes this album stand out. You can hear creaking doors on “Classy Girls” and hand clapping in “Big Parade” as the recordings make you feel like you are hearing the band perform live just for you. Their wonderful songwriting shines on “Submarines” and on the album’s first single “Ho Hey.” They ease back on the pace for the ballad “Slow It Down,” but quickly pick up the tempo back up for “Stubborn Love.” The album closes with the 5-minute blues/folk of “Morning Song.”

The Lumineers are currently on tour in the U.S. They will also be performing at the Austin City Limits festival before heading over to Europe. For more information, please visit thelumineers.com.
Posted by JP's Music Blog