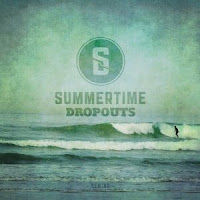 Newcomers the Summertime Dropouts have released their debut album “Rewind” on June 12. The energetic pop-punk band has the perfect soundtrack to your summer. Their songs are about summer love and catching rays, not bad for a band from Minnesota. Their fun, youthful sound makes you want to get to the beach, no matter where you’re from.

The album begins with the first single “Full Time Cutie” as you notice a maturity to their songwriting. The tempo is upbeat and their lyrics and hooks are undeniable. The song “1999” appears twice on the album, first as an all-out punk-rock attack, then again at the end of the album as a slow ballad. Songs like “Getaway” and ”Spring Flings” are fun to listen to and bring you back to a time in your life when things were simpler. The album also contains the arena rocker “Put Em Up” and the Top 40 sounding pop hit “Amie.”

The album was produced by Clint Gibbs (Katy Perry, Nicki Minaj, Britney Spears) and was released through Voluminous Records. The Summertime Dropouts have a couple of shows scheduled in August, but be sure to check out their facebook page (facebook.com/SummertimeDropouts) for more information.
Posted by JP's Music Blog

I never got a chance to thank you for this review. We really appreciate you taking the time and making the effort to cover Summertime Dropouts.