CD Review: Alvin Lee Is Still Walking On That "Road To Freedom" 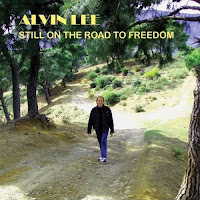 Almost thirty years after releasing his debut solo album, “On The Road To Freedom,” the Ten Years After front man returns with the sequel, “Still On The Road To Freedom.” After finding huge success at the Woodstock and Isle of Wight Festival, Ten Years After broke up in 1974. Alvin Lee enlisted the help of George Harrison, Steve Winwood, Ronnie Wood, Mick Fleetwood and Mylon LeFevre to create his debut solo album. The album contained many standout tracks including the Harrison penned “So Sad.”

Now, Alvin Lee returns after five years (since his last album) to release his most recent solo album, “Still On The Road To Freedom” on Rainman Records. This time he brings along his long time band members bassist Pete Pritchard and drummer Richard Newman along with keyboardist Tim Hinkley.

The album begins right were Lee left off with some great guitar driven songs like “Still On The Road To Freedom” and “Listen To Your Radio Station.” His voice still sounds timeless on the blues sounding; keyboard filled “Midnight Creeper.” Lee brings us back to the sixties with the jukebox hop of “I’m A Lucky Man,” before giving us some heartfelt acoustic ballads “Walk On, Walk Tall” and “Song Of The Red Rock.” Lee shows off his outstanding song-writing talents on the south of the border swag of “Nice & Easy” and the instrumental “Down Line Rock.” The album finishes with a remake of the Ten Years Gone song “Love Like A Man 2.”

Alvin Lee has only one show scheduled at the moment as it will take place in April 2013 with Johnny Winter at the Olympia Hall in Paris. For more information on his new album, please visit his website (alvinlee.com).
Posted by JP's Music Blog