CD Review: Another Lost Year Will Have "Better Days" 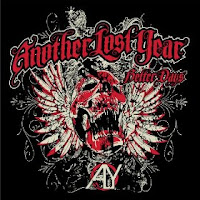 From Charlotte, NC comes Another Lost Year with their Megeforce debut “Better Days.” The album was released on August 14th and produced by Justin Rimer (12 Stones). Another Lost Year was named the 2011 Rock Band of the Year in North Carolina and is currently on the road promoting the new album.

The album begins with the pounding drums of “Better Days” as you can’t help but compare their sound to Creed. Their sound gets more aggressive on “War On The Inside” before hitting their mainstream stride with the acoustic rock of “All That We Are.” The power and force of “Broken” and “What I Deserve” is a welcome addition to off-set the power ballad “Angels.” The band once again flexes their rock muscle on “Writing On The Wall” before finishing the album with the passionate screams of “Forgot About Us.”

For more information on this rising band, check out their website at anotherlostyear.com.
Posted by JP's Music Blog