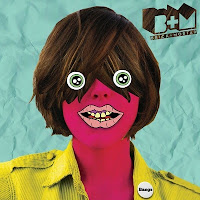 The New Jersey duo of Brandon Asraf and John Tacon have come together under the name Brick + Mortar to create a very drum heavy EP entitled “Making Moves.” This is the duo’s third EP in three years. The songs featured on this EP were released as separate singles through Mad Dragon Records along with the support of Motion City Soundtrack.

The first song is “Bangs” which features a pounding drum beat highlighted by a fuzzed out guitar. The rawness of the song draws comparisons to what The Black Keys produce on their albums. The song “Old Boy” has a bit more funk in its beat as it pounds the speakers. The album closes with “Other Drugs” as Brick + Mortar stretch their sound along a very up-tempo beat.

For more information on Brick + Mortar, visit their website at brmr.net and check out their epic video for the song “Bangs.”
Posted by JP's Music Blog