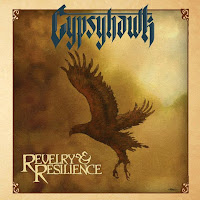 Heavy metal band, Gypsyhawk is getting ready to release their much-anticipated Metal Blade Records debut album “Revelry & Resilience.” The band has been named one of the top “100 bands you need to know” by Alternative Press Magazine and have been compared to UFO by Metal Hammer UK. The band took some classic rock guitar riffs for their debut album and created some great hard-rocking songs that metal fans are sure to love.

The album begins with the blazing duel guitars of “Overloaded” as the band plays loose and loud. Gypsyhawk get into a ZZ Top groove on “The Fields” as the band’s overall sound dates back to the hard rock seventies of Thin Lizzy and Deep Purple. The band’s song-writing for this album have been influenced by the George R. R. Martin novels “A Song Of Fire And Ice” as noticed in “Frostwyrm.” Gypsyhawk lets some of their progressive-rock ambitions slip in to “Night Songs From The Desert,” before finishing the album with the heavy metal, guitar driven “State Lines” and a spot on cover of Johnny Winter’s “Rock and Roll Hoochie Koo.”

Gypsyhawk have live dates almost every day in September and they will also be aboard the Mayhem Festival Cruise, performing alongside Anthrax, Hatebreed, Machine Head and others. For more information on their new album “Revelry & Resilience” and for a complete list of tour dates, check out the band’s facebook page (facebook.com/Gyspyhawkusa).
Posted by JP's Music Blog

The mayhem festival cruise was canceled, and, while this is their first album under the metal blade label, this isn't their debut...nor that I think anyone will be confused...