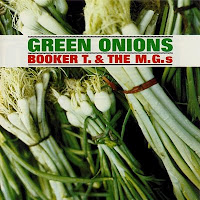 It has been fifty years since Booker T. & the M.G.s released their smash instrumental “Green Onions” and to celebrate the anniversary, the Concord Music Group is reissuing the album along with two bonus songs. Booker T. & the M.G.s were the “house band” for the Stax Records label in the early sixties, performing on albums from Otis Redding, Wilson Picket, Rufus Thomas and others. Rumor has it that the four musicians came together in the studio one afternoon to record with rockabilly/pop/country singer Billy Lee Riley, but Riley only had enough material to record two or three songs. So after the session was done with Riley, the band just jammed on this blues riff. Producer Jim Stewart enjoy the music so much, he grabbed a tape and recorded the second full take of the song, which became one of the biggest instrumental hits in music history reaching #3 on the singles chart and #1 on the soul chart.

Now after fifties years, the original full-length album of instrumentals was carefully remastered by Joe Tarantino and includes a live version of the title song and a live version of the Phil Upchurch hit “Can’t Sit Down.” Both songs were recorded live at the 5/4 Ballroom in Los Angeles, CA in 1965. The original album features 12 songs, most of them covers, including Ray Charles’ “I Got A Woman,” the Isley Brothers’ “Twist And Shout,” and Jackie Wilson’s “A Woman, A Lover, A Friend,” but none of them had that spontaneous mix of blues and soul like “Green Onions.” Booker T. & the M.G.s even tried to recapture the magic with “Mo’ Onions.” This album began the career of a band that went on to make fourteen albums over the next fifteen years with many of them cracking the top 100 on the album charts.

This new remastered CD was released on July 24 and has these songs sounding better than they ever have before. For more information on this release, please visit concordmusicgroup.com.
Posted by JP's Music Blog