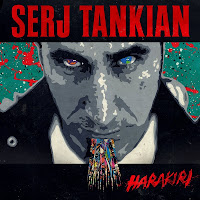 Musician Serj Tankian has enjoyed his hiatus from his band, System of a Down, by releasing three solo albums in the last five years. His most currently release, “Harakiri” was released back in July and hit #29 on the Billboard Album chart. According to Tankian, this is “the most up-tempo punk rock oriented record that I’ve written since the System days.” After the release of his 2010 symphonic rock album “Imperfect Harmonies,” this is a breath of fresh air and movement in the right direction for fans of System of a Down.

The album begins with “Cornucopia” which finds Tankian in familiar territory with deep bass grooves, loud guitars and hard rock drumming. This gets carried over into the album’s first single “Figure It Out.” This song is the most hard-rocking song on the album and really shows off how good his solo band is. Another great piece of music is “Butterfly” with its quick, punk-like drumming and sing-along chorus. Tankian takes a more progressive rock feel to “Occupied Tears” and adds some electronics to the mellowness of “Deafening Silence.” He brings back the power and intensity in “Uneducated Democracy” before finishing the album with the aggressive “Weave On.”

Serj Tankian just wrappped up a reunion tour with System Of A Down, then he is heading over to Europe for two months of solo dates. For more information on the new album and for a complete list of tour dates, please visit serjtankian.com.
Posted by JP's Music Blog

Best album oh the 3 made by Serj in solo