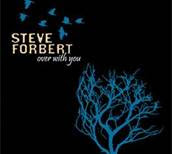 Grammy nominated songwriter Steve Forbert, best known for the 1980 hit song “Romeo’s Tune,” is preparing to release his fourteenth album entitled “Over With You.” Hailed by critics as the “new Bob Dylan,” Forbert’s songs have been recorded by several artists including Rosanne Cash, Marty Stuart and Keith Urban. On his new album of original songs, Forbert incorporates the help of Ben Harper, Ben Sollee, Jason Yates, Michael Jerome and Sheldon Gomberg.

The album was recorded at the Carriage House studio in the Silver Lake’s neighborhood of Los Angeles as the songs reflect a more laid-back vibe beginning with “All I Asked Of You.” The gruffness in Forbert’s voice is most noticeable on the up-tempo songs “All I Need To Do” and “Metal Marie.” His storied songwriting shines on the pleading vocals of “Baby, I Know” and “Don’t Look Down, Pollyanna.” The album finishes with “Sugarcane Plum Fairy” as Forbert’s vocals reflect those of Tom Waits while the lyrics play out like a modern fairytale.

Steve Forbert has a jam packed tour schedule that includes a show at the Arch Street Tavern in Hartford, CT on September 15. Please visit steveforbert.com for a complete list of dates that run until the end of the year.
Posted by JP's Music Blog