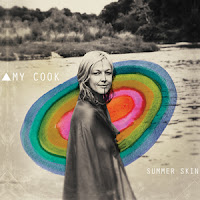 From California comes singer/songwriter Amy Cook with her latest release “Summer Skin.” The album was released back in August on Roothouse Records and features guest artists including Ben Kweller, Patty Griffin and the legendary Robert Plant. Cook found her first success in 2005 with songs appearing on the shows “Dawson’s Creek,” “Veronica Mars,” “Laguna Beach” and “The L Word.” She found the limelight again in 2010 with her single “Hotel Lights,” which found praise in the magazines, Rolling Stone and The Austinist. Now, after years of performing in coffeehouses and clubs, Amy Cook is ready for the bright lights of stardom with her new release.

Her slightly smoky voice fits in so comfortably with the music on the opening track “Waiting For The World” that you instantly find yourself a fan. The harmonies supplied by Robert Plant on “It’s Gonna Rain” easily makes this one of the stand-out tracks on the album with Amy’s gentle flowing heartfelt lyrics. Her tone gets a little darker on the moody, six-minute, Doors-type rocker “Airplane Driver,” which features guest vocals by Patty Griffin. Amy Cook gets playful with her lyrics on “Hello Bunny” and simplifies her sound on the acoustic “Levee.” The album closes with “Heart Is A Ghost” as Amy’s vocals matches the lyrics and mood of the song perfectly.

Amy Cook is currently on tour in the Midwest before heading back out to California in October. For more information on her new album “Summer Skin,” please visit amycook.com.
Posted by JP's Music Blog