CD Review: Rachael Sage Spreads Her Beauty On "Haunted By You" 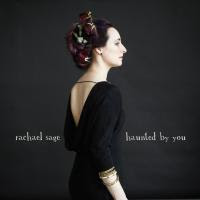 Singer/songwriter Rachael Sage released her 10th studio album, “Haunted By You” earlier this year to rave reviews. She has also shared the stage with fellow female musicians Sarah McLachlan, Ani DeFranco and on her latest tour, the legendary Judy Collins. Rachael Sage also recently released a six-song EP entitled simply “The Acoustic EP.” The songs on this release feature stripped down versions of songs from her “Haunted By You” album.

The album begins with the gentleness of “Invisible Light” which allows Rachael’s vocals to be the main focus. The song makes a reprise again at the end of the album which includes additional vocals from Dar Williams. Rachael Sage’s voice pleads on “Abby Would You Wait Me,” before she demands your attention on “California” as she just takes you on a journey with her words. Rachael seems so venerable on “Everything,” then comes back strong on the powerful “Ready.” Rachael Sage puts all she has into her performances as heard in “Birthday” and “Confession.” She sings from the heart, which is what makes her songs so meaningful.

Rachael Sage is currently on a tour which will last until December. She visits Connecticut on October 21st with a show at the Infinity Music Hall with Al Stewart. Early November finds her headlining some dates in Europe before returning back to the states. For more information on Rachael Sage’s new album “Haunted By You and her acoustic EP, please visit rachaelsage.com.
Posted by JP's Music Blog