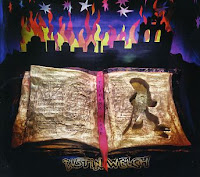 From Austin, TX comes Dustin Welch, son of the famed country songwriter Kevin Welch, with his second self-released album, "Tijuana Bible." After a short stint with the west coast punk band Scotch Greens, Dustin Welch went on his own, releasing his debut solo album in 2009. Now Welch returns with one of the most rocking Americana albums ever released.

The drum and bass groove of the opening song, "Ash & Iron" puts you under Dustin's spell as his vocals reflect an edgier Americana/Folk sound. Welch paints the perfect picture of a sea captain telling stories with the shanty "Lost At Sea," while "Jolly Johnny Junker" carries a raw, gritty folk rock sound with a classic appeal. Dustin heads mainstream with pop rock of "Goodbye," before returning to his folk roots with "Sparrows." Welch expands on his retro sound with the big rock of "Tango Blues" and then closes the album with the banjo-driven "Things I Cannot Change" and the upbeat drum/bass groove of "Tijuana Bible."

Dustin Welch has a load of live dates scattered over the next four months. His new album, "Tijuana Bible" comes out on February 12 through his own Super Rooster Records label. For more information on Dustin Welch, please visit dustinwelch.com.
Posted by JP's Music Blog