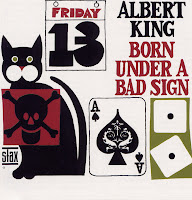 Blues icon Albert King is finally being inducted into the Rock N Roll Hall of Fame on April 18. In honor of this achievement, the Concord Music Group is re-releasing his legendary album "Born Under A Bad Sign" on April 2. The album changed American blues forever and became an instant favorite to fellow guitarist Eric Clapton, Jimi Hendrix and Stevie Ray Vaughan.

The original 11-track album was remastered with 5 never before released bonus tracks. Right from the opening notes of "Born Under A Bad Sign," you can hear the warmth in King's guitar. Most of the songs on this release are covers that King turned into his own personal pieces of art. Classic songs like "Kansas City" and "I Almost Lost My Mind" remind you of how King's singing was almost as powerful as his guitar solos.

The five bonus songs consist of four alternate takes of "Born Under A Bad Sign," "Crosscut Saw," "The Hunter" and "Personal Manager." Each of these are just as good as the released version with a slightly different solo or guitar riff. The real gem is the two-minute untitled instrumental that allows King to let his emotions flow.

The new release also comes with a 16-page booklet that includes the original 1967 album notes, the 2002 CD re-issue essay by Michael Point and a brand-new essay by music historian Bill Dahl. For more information on this outstanding album, please visit www.conqueroo.com/staxrecords.html.