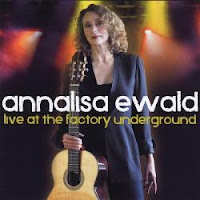 Classical guitarist Annalisa Ewald will be releasing her new live album entitled “Live At The Factory Underground.” The album offers fifteen wonderful songs based on South America as her interaction with the audience in between songs is fun, but minimal.  The music is so laid-back and relaxing that the only thing that breaks your attention is the applause.

As only a handful of the songs break the two-minute mark, the short, but powerful pieces of music pays the proper respect to past composers like Daniel Fortea, Rodrigo Riera and Julio Sagreras. Ewald is one of the most respected classical guitarists among fans of rock, blues and country and her performances of “Farucca” and “Por Una Cabeza” can attest to that. The two bonus songs (“Vals Venezolano #1” and “Vals Venezolano #2”) are some of the best performances on this album as Ewald pours her passion in these pieces of music.

Annalisa Ewald still continues to teach students in her Norwalk, CT guitar studio as well as perform live. A portion of the proceeds from the album’s sale will be donated to the John DeCamp Fund to help veterans heal though music and caring. For more information on her new album, please visit annalisaewald.net.
Posted by JP's Music Blog