CD Review: Devil To Pay Have Sealed Their "Fate" 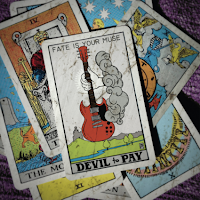 From Indianapolis comes the hard rock band Devil To Pay with their third full-length album, “Fate Is Your Muse.” The album was released on April 9 through Ripple Music and features some of the band’s best songwriting to date. Devil To Pay has suffered through the past ten years of trouble and turmoil to create an album to be proud of.

The band comes out blazing on the opening song “Prepare To Die” as you feel the heavy metal drumming and crunching guitars to give their music the edgy feel. They pick up the pace on “Ten Lizardmen & One Pocketknife,” before the slow grind of “Wearin’ You Down” and “Yes Master.” The power riffs and hard rock speed that Devil To Pay are known for comes through on “The Train Won’t Stop” and “Savonarola.” The album closes with the contrast of the up-tempo, mainstream hard rock of “Tie One On” and the Alice In Chains-type slow burn of “Beyond The Ether.”
Devil To Pay performed an album release show earlier this month and has a couple more shows on their schedule in the Indianapolis area. For more information on the band and their new album “Fate Is Your Muse,” please visit deviltopay.net.
Posted by JP's Music Blog