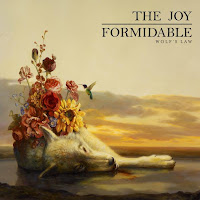 Welsh alternative rockers The Joy Formidable released their second full-length album earlier this year entitled “Wolf’s Law.” The album was written and recorded during the band’s 12-month tour in support of their debut album, “The Big Roar.” According to lead singer/guitarist Ritzy Bryan the songs started out and vocals being accompanied by only one instrument and then being built up from there.

The album begins with album’s biggest single, “This Ladder Is Ours” as the three-piece band strap on their gear, plug in and rock. The song cracked the Top 25 on the Billboard Alternative Songs chart and showed their balance between aggressive and pop rock. They flex their alternative/punk muscle with the quick-paced “Cholla” and “Bats,” before slowing the tempo down for the simpler sounds of the “Silent Treatment.” The Joy Formidable show a grittier side to their music with the bass driven “Little Blimp” and the quick drumming of “Maw Maw Song.” The album could have another hit single with the punk-pop of “Forest Serenade” as they once again show that balance of aggressive and mainstream rock. The album closes with the slow-building “The Turnaround” and the hidden song “Wolf’s Law,” which displays the song’s progression from a simple piano to grand orchestration.

The Joy Formidable are once again touring hard behind this latest release as they have a full schedule of shows running until the end of August. For a complete list of tour dates and more information on the new album, please visit thejoyformidable.com.
Posted by JP's Music Blog