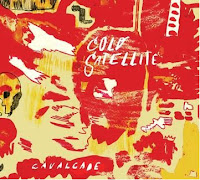 Out of Northampton, Mass comes the rock 'n' roll band Cold Satellite with their sophomore album, "Cavalcade." Led by Jeffrey Foucault, the band began three years ago when Foucault's writing partner Lisa Olstein handed him some poems to which he turned into raw, rock gems with the help of some friends.

Now Foucalt and Olstein team-up once again to create some truly special songs including the countrified ballad "Cavalcade" and the epic sounding "Pearlescent." The acoustic/electric blues of "Bomblet" and the mystical quietness of "Glass Hands" really allow Olstein's words to take off and live on their own as Cold Satellite place the perfect backdrop on them. Plus, this band can rock as shown on "Silver Whips" and on "Elsewhere" with guitars blazing and the volume turned up to eleven. The album closes with the feel good, comfortable acoustic, Neil Young sounding "Every Boy, Every Blood."

Jeffery Foucault and Cold Satellite will begin their tour in June and spend the summer on the road. For more information on Cold Satellite's new album "Cavalcade" and for a complete list of live dates, please visit coldsatellite.com.
Posted by JP's Music Blog