CD Review: More From Metal Blade Records For The Month Of June

The month of June has a load of new heavy metal music coming from Metal Blade Records. Many of these bands are four or five albums into their career and are looking to dominate their metal genre with a stranglehold of new music.  On June 11, we get new albums from doom metal bands, The Devil’s Blood and Church of Misery and death metal band The Black Dahlia Murder which will be performing on this summer’s Vans Warped Tour. Later on in the month we get new death metal music from Sweden’s Amon Amarth, who will be climbing aboard the Rockstar Energy Drink Mayhem Festival at the end of June. 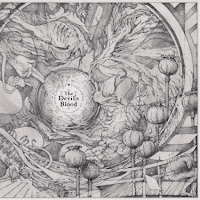 The Devil’s Blood’s new album title, “III: Tabula Rasa or Death and the Seven Pillars” is almost as long as some of the songs on the album. Beginning with the 22-minute “I Was Promised a Hunt” which tells the story through minor chord and tempo changes, but rocks hard with its thumping doom metal backdrop. They show us that great classic seventies metal sound with “The Lullaby of the Burning Boy” and “… If Not A Vessel?,” before returning to the epic songs like the 10-minute blast of “White Storm of Teeth” and the up-tempo, 8-minute instrumental album closer “Tabula Rasa.”
Back in January, the band issued a statement that this will be their final full-length album. To find out more on The Devil’s Blood, please visit thedevilsblood.com. 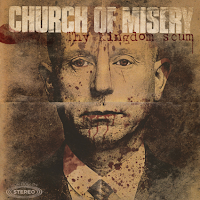 Japanese doom metal band Church of Misery return with their fifth full-length studio album, “Thy Kingdom Scum.” Also returning is lead-singer Hideki Fukasawa, who skipped the band’s last album after a three year hiatus. The album kicks off with the hard grind of the instrumental “B.T.K.” as the band continues to keep their edge after almost 20 years into the business. Fukasawa wastes no time announcing his return, screaming the lyrics to the seven-plus minute “Lambs to the Slaughter.” The band digs deep, pulling off their best performance with “Brother Bishop,” tackles the 1970’s Quartermass cover “One Blind Mice.” The album closes with Church of Misery building up the 12-minute epic “Dusseldorf Monster” with outstanding performances by Tatsu Mikami (bass) and Ikuma Kawabe (guitar).
To find out more about the Church of Misery, please visit churchofmisery.net. 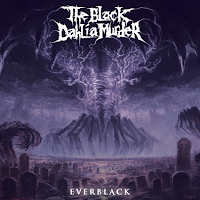 Next up to blast away your eardrums is one of today’s most popular hardcore death metal bands, The Black Dehlia Murder. Their new album “Everblack” follows their rising success on the music charts. The band’s last album “Ritual” cracked the top 40 and helped the band secure a headlining spot on this year’s Vans Warped Tour. The beginning of the album just blows you away with its speed metal drumming and screaming vocals of “In Hell Is Where She Waits For Me.” The ten song album is sure to get the adrenaline pumping, attacking the senses with “Goat of Departure” and “Into the Everblack.” The pulsating drumming and guitar intro to “Blood Mine” and the vocal attack of “Every Rope A Noose” are what feed this musical monster of sound. The album closes with more speed and energy as “Map of Scars” is not for the faint of heart.
Look for The Black Dahlia Murder on tour this summer. For more information, please visit the band’s Facebook page at www.facebook.com/theblackdahliamurderofficial. 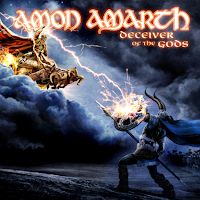 Finally on June 25th we get the new album from Sweden death metal band Amon Amarth. It is the band’s ninth album and arguably one of their most powerful. Beginning with “Deceiver of the Gods,” you notice a band that has the experience to energize fans with their music, while also keeping their sound fresh. The band’s obsession with Norse mythology comes through in the growling vocals of “As Loke Falls” as well as their interest in the mystics of “Shaper Shifter.” Amon Amarth continues their onslaught with the speed of “Blood Eagle” and the aggression of “We Shall Destroy.” The album closes with the eight-minute epic story of the “Warriors of the North.”

Look for Amon Amarth to invade the U.S. this summer as part of the Rockstar Energy Drink Mayhem Festival. For more information on the band and their new album “Deceiver of the Gods,” please visit amonamarth.com.
Posted by JP's Music Blog