CD Review: Booker T. Wants To "Sound The Alarm" With A Little Help From Friends 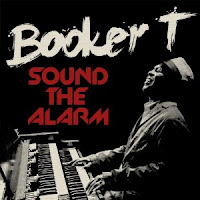 The multi-talented, multi-instrumentalist Booker T. Jones recently released his tenth studio album entitled "Sound The Alarm" on June 25th on Stax Records through the Concord Music Group. It is Booker T's first album on the label since his debut album, "Green Onions" back in 1960. On this album, Booker T allows some of the newcomers in the music industry to own the spotlight, while he sets up a backdrop of amazing soul music.

The album starts off with the title song, "Sound The Alarm," which features Mayer Hawthorne's gospel-like vocals layered over a stomping beat. Booker T flexes his musical muscles on the sixties R&B sounding instrumental, "Fun," before allowing soul singer Jay James to work his Al Green-type swagger on the bluesy-soul of "Broken Heart." One of the biggest newcomers to pick up a guitar is Gary Clark Jr., who's received praise from the likes of Eric Clapton and The Rolling Stones. On the song, "Austin City Blues," Clark interweaves his solos along with Booker T.'s keyboards to create a truly special bond between the two musicians. R&B pop singer Estelle gives the album a very mainstream modern dance vibe with "Can't Wait" and Poncho Sanchez and Sheila E. add a little Latino flair to "66 Impala." The album finishes up the R&B rockers Vintage Trouble showing their slower, bluesier side on "Your Love Is No Love" and then Booker T invites his son along for a little bonding time to close the album with some "Father Son Blues."

All of the songs on the album were written by Booker T as he is currently taking this album out on the road. He will be performing at a couple stops in New England in late July before heading to the west coast in August. For a complete list of tour dates and for more information on the new album, please visit bookert.com.
Posted by JP's Music Blog