CD Review: New Documentary And Soundtrack Show Another Side To Big Star's Legacy 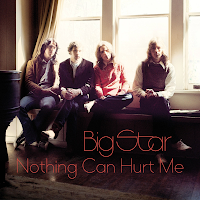 Formed in 1971 in Memphis, TN; the band Big Star laid the groundwork for alternative rock, before the term was even used to describe the type of music that was raw, real, pure rock feel. The band had a spurt of three years and three albums that would influence many of today's bands including R.E.M., Wilco, The Flaming Lips and a whole lot more. The band had all the ingredients, (exceptional songwriting and raw, truthful sound) to have the hit singles, but never got the success they deserved. After breaking up in 1974 due to frustrations with the music industry, they would re-groups 20 years later to find that their music meant so much to other upcoming bands. Big Star was considered one of the ultimate cult bands that did not receive their proper acclaim until after the band called it quits a second time after the death of founding members Alex Chilton and Andy Hummel.

Now, to set the record straight, Magnolia Pictures will be releasing the feature length documentary "Big Star: Nothing Can Hurt Me" on July 3. The film follows the band during their initial commercial failure and their rising success as on of rock's music greatest cult bands. Along with the movie comes the soundtrack, released by Omnivore Recordings on June 25. The soundtrack brings together 21 previously unheard recordings by the band during their seventies hey-day. Each of the band's early records made Rolling Stones' Top 500 Albums Of All Time countdown and all are represented here with classic alternate mixes and modern movie mixes.

Beginning with the 1973 rough demo of "O My Soul" you get a feel for a band on the brink of stardom as shown in the documentary. The band's first album is covered intensely with nine of the album twelve songs featured on this soundtrack in one form or another. One of the things that fans will enjoy hearing is the studio talk between members of the band leading into the songs. Big Star's most well-known song, "In The Streets" was remixed for the movie, but still resonates the teenage rock angst of the original song. The rough mixes of songs like "Holocaust" and "Big Black Car" show the band still feeling their way the songs that would later become staples in their legacy. The soundtrack also includes a couple of solo efforts from the late-Chris Bell ("Better Save Yourself" and "I Am The Cosmos") and the acoustic, heartfelt ballad, "All We Ever Got From Them Was Pain" from the late-Alex Chilton. The soundtrack finishes up with one the band's biggest studio effort, "September Gurls" which has been considered a "power pop classic" by Rolling Stone magazine.

To find out more about the "Big Star: Nothing Can Hurt Me" movie and soundtrack, please visit bigstarstory.com.
Posted by JP's Music Blog