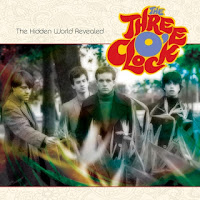 California rock band The Three O'clock are finally getting back together for a reunion which was kicked off at this year's Coachella music festival. Twenty-Five years after they broke up, we are finally getting a proper compilation of the band's earlier catalog with "The Hidden World Revealed." It brings together 20 songs from the band's beginnings in 1981 until their signing to I.R.S. Records in 1985. The only song on this compilation from past that era is the 1986 Christmas single "Regina Caeli."

The album begins with the psychedelic pop sound of the 1983 release, "All In Good Time." They show-off that eighties, alternative, underground energy with the song that was featured on the band's first EP, "With A Cantaloupe Girlfriend." They draw strong similarities to R.E.M. with the pop-punk of "Stupid Einstein" and cover Syd Barrett's "Lucifer Sam" with some truly dark, experimental rock. The compilation also adds ten previously unreleased versions of some of the band's classic compositions, including adding horns to the underground pop of "When Lighting Starts" and showing a rawer, guitar driven version of "In My Own Time." The album also includes a demo version of one of the band's earliest recording "Jennifer Only," when the band was known at The Salvation Army. They close with a rare, but perfectly executed version of Gene Clark's "Feel A While Lot Better." Only 27 copies of this 7-inch 45 are known to exist according to the liner notes.

The new compilation, "The Hidden World Revealed" by The Three O'clock was released on June 25 through Ominvore Recordings with full participation from the band. To find out more about this album, please visit omnivorerecordings.com/artists/the-three-oclock/.
Posted by JP's Music Blog