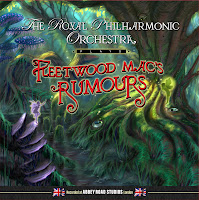 One of the biggest selling, most famous classic rock albums gets a make-over provided by one of the more prestiges orchestras. This new release features "The Royal Philharmonic Orchestra Plays Fleetwood Mac's Rumours." The album was recorded at the famous Abbey Road Studios and was released through Purple Pyramid, a division of Cleopatra Records.

The album plays in chronologic order, beginning with "Second Had News" as the RPO almost doubles the song's length in time to include a grand introduction to the music. It's hard to imagine some of the more popular songs done in a different way than what our ears have heard for the past 35 years, but they do an exceptional job with "Don't Stop" and "The Chain." The real treasures are how they breather new life into the lesser known classics like the tip-toeing of "Never Going Back Again" and the gentle acoustic sway of "Songbird." The album also features a couple of special guests included Sarah Jory on petal steel guitar during "You Make Loving Fun" and the great Peter Frampton on the big album closer, "Gold Dust Women."
The album was released on July 16. To find out more, please visit cleorecs.com/store/shop/royal-philharmonic-orchestra-plays-fleetwood-macs-rumours/.
Posted by JP's Music Blog