CD Review: The Greencards Pay Homage To The Ocean With "Sweetheart Of The Sun" 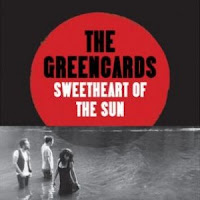 Australian/American band The Greencards return with their second album release through Darling Street Records, the highly anticipated "Sweetheart Of The Sun." The album uses the concept of the ocean, and other bodies of water, as the revolving theme. It was produced by Gary Paczosa (Allison Krauss, John Prine) and features the writing collaboration from Nashville's Kai Welch.

The twelve-song album starts off with the quick, two-minute warm-up, "Once And Gone," as the voice of Carol Young invites you into their world of Americana music. The Greencards hit their mark for mainstream stardom with "Forever Mine," before heading to the "Black, Black Water" with Carol's voice leading the way. Their music draws strong similarities to The Civil Wars with their "less is more" idea to making music. Their sound goes deep with the soft, gentle approach of the "Ocean Floor," then fellow band-mate Kym Warner is allowed to flex his fingers on the up-tempo instrumental "Ride & Sway." The album closes with the six-minute bluegrass sway of "Fly."

The Greencards have recently toured with Bob Dylan and Willie Nelson and are currently on the road promoting their new album, "Sweetheart Of The Sun," which will be released on August 20. For more information on the band and for a complete list of tour dates, please visit thegreencards.com.
Posted by JP's Music Blog