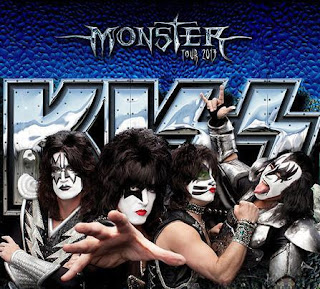 The iconic, make-up wearing rock band Kiss have always put their fans first when performing live. Their shows have become more of an event than your typical rock concert. As the audience filed into the Mohegan Sun Arena last Saturday night, you couldn't help but see the hundreds of different Kiss concert shirts from past shows. Also, fans wearing the make-up of their favorite band member and each year, more and more kids are attending their shows to see and experience what their parents have loved for the past forty years.

A loud, booming voice screamed out "You Wanted The Best, You Got The Best! The Hottest Band In The World, Kiss!" This signaled the beginning of an experience that all in attendance would never forget. As the curtain fell, three members of Kiss appeared on top of a giant metal spider which lowered them to the floor as they began the night inviting you to their "Psycho Circus." Fireworks, explosions and fireballs quickly turned the night into a "fourth of July" spectacle and this was all during the first song. The band mixed in a few new songs ("Hell or Hallelujah," "Say Yeah") with the classic concert staples "Shout It Out Loud" and "Calling Dr. Love." Front man Paul Stanley was very interactive with the crowd, getting them involved with some "audience participation" tests. Each band member would have their time in the spotlight. Guitarist Tommy Thayer and drummer Eric Singer would be lifted twenty feet up from the stage as they shot fireworks into the belly of the giant metal spider. Not to be outdone, bassist Gene Simmons emerged onto a dark stage for his solo. As he pounded away on his bass, fake blood would rush down his chin. Then he would ascend forty feet in the air to the top of the spider to perform his theme song, "God Of Thunder." Next was guitarist/singer Paul Stanley's turn as he hopped on a cable that flew him across the audience to a stage in the back of the arena for a performance of "Love Gun." All of these feats would lead up to the show closer, "Rock And Roll All Nite." During the finale, Simmons and Thayer would be elevated over the audience on two giant platforms as Stanley smashed his guitar on stage. While this is going on, confetti blew all over the arena as the stage exploded all around Singer's drum set.

As Kiss continues to set the bar for how many explosions and fireworks one band can fit into a show, their music continues to be timeless as it passes on to the next generation of fans.

Setlist: Psycho Circus, Shout It Out Loud, Let Me Go Rock N Roll, I Love It Loud, Hell or Hallelujah, War Machine, Heaven's On Fire, Calling Dr. Love, Say Yeah, Shock Me/Outta This World, God Of Thunder, Lick It Up, Love Gun, Black Diamond, Detroit Rock City, I Was Made For Lovin' You, Rock And Roll All Nite
Posted by JP's Music Blog